Being back in western Canada is all about visiting family and friends.  My first stop was in Edmonton where I spent a few days visiting my sisters Phyllis and Lori, along with other family members, such as my favourite niece Shirley.  The stop also included installing new tires on my bike and having it serviced at one of the local Harley dealers….and yes they have “oil field” service rates…ouch!

From there my intention was to ride  just south of the Yukon border, where my Dad rests.  Given the current situation with a number of major forest fires in the area I reluctantly left my bike in Edmonton in safe keeping at my sister’s and instead rented a car to make the trip.  In hindsight it was a wise choice as I’m currently in norther BC and the Alaska Highway is closed to the south of me preventing my return – stay tuned as that’s another post!

When I left Edmonton I headed north to Dawson Creek, BC where you can find the start of the legendary Alaska Highway.

The Historical Alaska Highway was built during World War II as a way of connecting Alaska with the rest of the United States in a joint effort to protect both Canada and the US after the invasion of Pearl Harbour by the Japanese. The highway begins in Dawson Creek, BC and continues into Alaska via Whitehorse in the Yukon. It was built between 1942 and 1948 and originally was about 2,700 km (1,700 mi) in length. Since that time the road continues to undergo constant reconstruction and is now just over 2200 km (1,400 mi) long. The legendary highway was known for being a rough, challenging drive, however it is now paved and continues to be straightened. 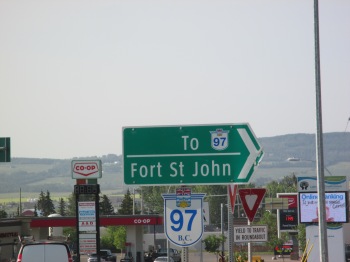 While passing through Dawson Creek I returned to the location where my career with the Federal Government began over 34 years ago!

During my quick stop in Dawson Creek I did a drive-by past the first house I owned.  Yup…it’s a little cutie.  It was nice to see that its owners have taken care of her over the years.

I didn’t have much time for visiting on my way up the highway so I’m looking forward to connecting with a few folks in Dawson Creek  on my way back to Edmonton where I’ll be picking up my bike.

When leaving Dawson Creek, I deviated from the beaten path and followed the historic route where the original highway had once been  in order to visit the first “curved” bridge of its kind which spans the Kistatinaw river located at “Mile 21” on the Historic Alaska Highway. 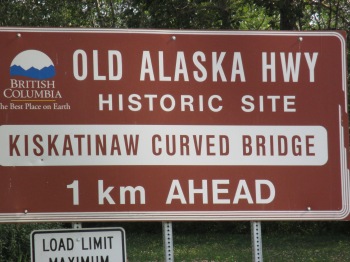 From here I traveled north towards Fort Nelson where I spent a number of years while growing up.  This took me over the Alaska Highway, through Pink Mountain and beyond.

My visit to Fort Nelson, BC was filled rich with memories and is worthy of a post unto itself so stay tuned for my upcoming blog.

Until then be safe and remember that when you smile at life it smiles back at you!

3 thoughts on “The Big Ride – The gift of remembering when (Dawson Creek, BC)”