As my trip unfolds it seems to me that the sights are getting better and better.  While enroute to Yellowstone Park I took a day to ride Beartooth Highway which runs along the Wyoming and Montana border.   The first known crossing of the Beartooth mountains was in August 1872.  A General in the Civil War, along with 120 of this men followed the advice of an old hunter who recommended taking the route while returning from an inspection of Yellowstone Park.  In 1936 when the road opened, it essentially followed the General’s first route over the pass.

The road is very impressive with its series of steep zigzags and switchbacks that continue upwards to almost 11,000 feet and includes some of the most dramatic landscapes.  It was also very “cool” to see snow along the route at the higher elevations!  Christmas in June anyone? 🙂

Because of the high altitude, snowstorms can occur even in the middle of the summer.  The pass is known for exceptionally strong winds and severe thunderstorms.  I was chased around by a few threatening clouds during the ride but managed to hang on to my bike and avoided getting wet.

Here is a video of the days ride across the Beartooth mountains along with a number of photos taken while enjoying the ride. 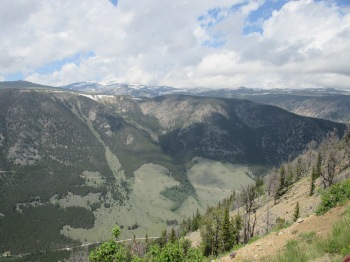 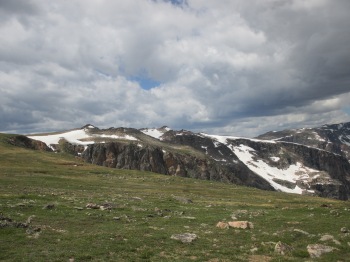 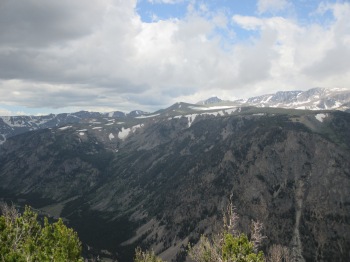 My next post will be with Yogi Bear in Yellowstone Park!

2 Replies to “The Big Ride – When Big is BIGGER than Big and goes over the top! (Beartooth Highway, Wy)”