As I made my way west I had the unfortunate experience of being stuck in traffic on the I-10 a few miles outside  of Orange, my first destination in Texas.  I haven’t been using the freeways on this trip but every now and again it’s a necessity, as it was a couple of days ago.  It was Saturday, traffic was heavy and there was a short stretch of construction that resulted in hours…and I mean hours of sitting on the hot pavement idling along and slow riding in first gear.  After an hour I pulled off into a truck weigh station to let my bike cool down and after the second hour I was fortunate enough to be able to pull off at the Texas Travel Center and benefit from their air conditioning and some fresh water.  It was about 40 degrees Celsius that afternoon without taking the humid-ex into consideration or the heat off of my bike.

Lesson learned:  travel during the cooler part of the day by leaving earlier and  check the internet for possible construction delays.

On the other hand, my experience has been that with every challenge comes a blessing and stopping in at the travel center that day and speaking with one of the staff members was just that.  She suggested that I include a visit to Nacogdoches, the oldest town in Texas to my route.  What an awesome suggestion it turned out to be!

I took Route 87 through the Sabine National Forest which is treed with beautiful Yellow Pine.  The scent of the pine filled my senses as I wound my way through the majestic forest.  When I reached Nacogdoches I was pleasantly surprised to find that it was a town that was rich with both history and beauty of every kind.

First of all, the little town wasn’t so little.  It has a thriving University with an established forestry and agriculture program which adds a youthful and vibrant air to the town.  A walk through the university’s arboretum was a delightfully refreshing experience on a sunny hot Sunday afternoon.

Initially Nacogdoches was an Indian settlement prior to Spain establishing a mission there in 1716.  In the early 1800’s when Tejas (that isn’t a typo and was the original Spanish name for Texas) was still part of Mexico, Nacogdoches was considered the “Gateway” as settlers moved north during this era when Mexico encouraged migration and colonization to the region which is now the state of Texas.

After the Texas Declaration of Independence was signed in 1836 another significant event took place that changed the face of  Nacogdoches.  In 1866 the first oil field in Texas was discovered in Nacogdoches county. Yup…Black Gold…Texas Tea!

Here are a few photos of the town, as well as a couple video clips that I’ve put together for your viewing pleasure. 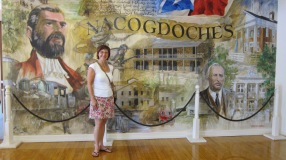 Here’s a two short videos of some incredible architecture in the historic town of Nacogdoches.

If Texas happens to be on your bucket list, I recommend that you add Nacogdoches to your itinerary.  Be sure to stop into the town’s visitor center and while there speak with Mark if he’s around as he has a wealth of knowledge about the local history and is a delight to speak with. The center has a plethora of historical exhibits that you may find interesting as well.

Mark, thank you for all of the information on your beautiful town and for the many travel suggestions you shared!