Thursday, May 20, 2015 was a spectacular day for a number of reasons.  The first was spending two nights in Charleston, WV which meant a day that did not involve having to load up my bike.  I know, life is tough but I’m a woman and I brought a lot of stuff with me so the break was really appreciated 🙂

The second thing that made the day spectacular was the ride.  When I was doing the route planning I contacted the West Virginia Harley Owners Group and they forwarded me a great brochure, which included what ended up being an incredible ride.  In fact it may well have been the best so far. The route started out with a few miles on Highway 3, also known as Coal Miners Road.  The ride which was one sweeping curve after another was made even more pleasant by the sweet smell of wild white roses growing along the roadside.

In the past few days I’ve learned a great deal about West Virginia heritage, along with the impact the coal industry is having on the local economy.  A young coal miner that I met on the way told me that many of the mines are being closed in favour of finding a cleaner energy source…the problem however is that another energy source hasn’t been established despite 40% of the State still relying on coal as it’s main energy source.  Some of the towns I rode through were literally boarded up as a result of mine closures.  A dreadful place to be for many.

The route continued to Highway 41 which was a quiet secondary road that wound through the countryside and into Babcock State National Park.  What a delight that was.  The park was quiet as many campers and travelers are holding out for Memorial Day weekend which is just around the corner.  The park was made up of a series of one way routes that wandered through the beautiful green forest. 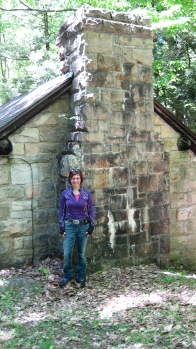 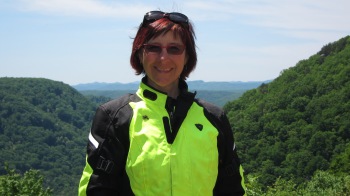 The ride also included a stop in Hawks Nest State Park which is very picturesque and pristine.  This provided an opportunity for a little stroll in the woods.  I hope you enjoy the walk with me:

And of course, what would a ride be without some awesome twisties.  Hawks Nest State Park on Route 60 was spectacular and this loop turned into some of the best riding yet. This is not a route for the faint of heart.  It was a series of hairpin corners that required some fancy work with the shifter.  Much of the ride was in second and third gear with several opportunities to get down to the nitty gritty of first gear.  Gotta say it was challenging…especially with a number of 18 wheelers on the road and those big shiny chrome grills heading for you as you’re navigating hairpin turns.  Yup…I loved every minute of it!!

Here’s a video that incorporates both Babcock Park and a little of Route 60: